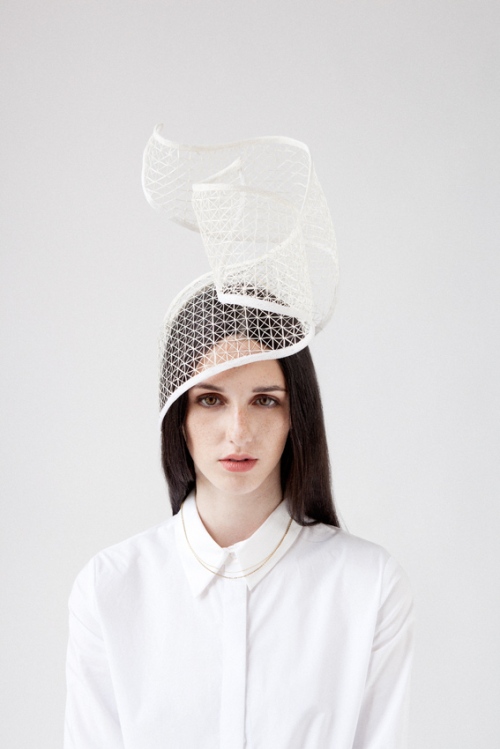 One of Ireland’s most exciting young fashion designer, LAURA KINSELLA weaves love into her exquisite and abstract collection of hand crafted hats and headpieces.

A Philip Treacy protégé and the only milliner to represent Ireland at Unfold in the ‘International Fashion Showcase’ at London Fashion Week 2015, Kinsella’s creations had us enchanted for the iconic usage of fluid lines and organic shapes in her ethereal designs.

Her refined craftsmanship stems from a traditional technique of hat making she had honed training at the award-winning and highly-acclaimed Limerick School of Art & Design in Ireland, where she graduated with an honours degree in Fashion Design in 2008, along with apprenticeships and working experiences in the millinery industry across numerous cities and countries.

The Dublin-based designer’s first bespoke range was launched in 2013. In the three years since her brand incepted, she has quickly managed to carve for herself a niche in the highly specialised league of hatmakers.

On two occassions, Kinsella has colaborated with Irish designer Danielle Romeril on both her spring/summer 2014 and 2015 collections.  The latter was subsequently presented at London Fashion Week to much acclaim.

She has also designed a collection ‘The Fifth Platonic’ for the fifth edition of CREATE at Brown Thomas, which is part of the Selfridges group.

Kinsella has been crowned with numerous accolades for her ability to spin refreshingly innovative takes on promising sheaths of whites, from the obscuring of faces to give it a sense of mystery, to the lending of an added charm to one’s outfit and gilding of the lily with her sprightliest creations, be it for a bride on her wedding day or a trendsetter who wishes to stand out stylishly during luncheon on a horse day.

Her designs are without a doubt beautiful and unique at the same time, and the quality found within her pieces transcend the frivolous perceptions that the industry has on millinery arts over the decades.

We caught up with Kinsella herself to find out about her interesting journey in millinery so far, and her thoughts on the global fashion market. 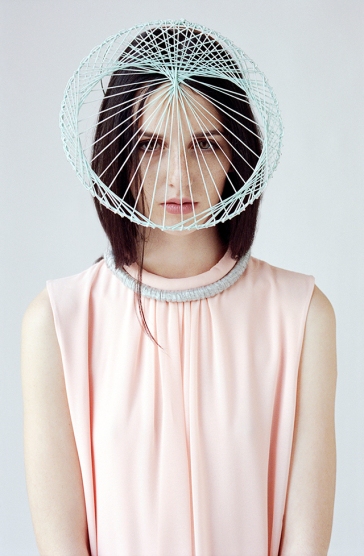 LK: I have always had a great interest in accessory design, headwear in particular. Ironically though, the act of getting into the millinery industry was an inadvertent avenue. What happened was I was working in the womenswear industry abroad, and when I came back to Ireland, I was randomly offered two positions at the same time – one in knitwear and one in millinery – and I obviously chose the latter! The rest as they say is history.

How long does it take on average to create one of your hats?

LK: It can take anything from 6 to 40 hours! Most of them average between 2 and 3 days. The Fractal (below) from my collection ‘Manifold’ took me roughly around 200 hours to complete, and I worked on it gradually over a 2-month period.

What have been some of your favourite materials to work with?

LK: I love working with jinsin, a woven straw fabric with thread native to the Philippines. I also use a lot of classic fabrics such as felt and velvet in my hats. Some of the materials I’ve been working a lot with lately include Irish waxed linen thread combined with magatama miyuki Japanese seed beads, which have become a new favourite of mine.

Where do you usually get your inspiration from?

LK: It can really be from anything. I get my inspiration from films, architecture, artists, and geometry, to name a few. It really varies from season to season, and it depends to whatever mood I’m in, what I’m reading, the music I’m listening to, as well as my surroundings.

What are some of your greatest achievements so far since the inception of your bespoke label in 2013? How would you describe the progress of your brand so far?

LK: It is hard to pin one as the little achievements can sometimes be as great as the big ones. Obviously winning the titles Breakthrough designer of the year 2014 at Kerry Fashion Week and then Milliner of the year 2015 were huge milestones for me.

The fact that Philip Treacy picked my Sora headpiece as the winning entry for ‘Most Creative Hat‘ was an incredible thing as well, and being selected to present at London Fashion Week where my works were being recognised by some of the pop world’s biggest stylists can all be marked down as great achievements for me.

But really, it is the little accomplishment of being able to get up every day and being able to work as an artist at something I love is by far my greatest achievement. 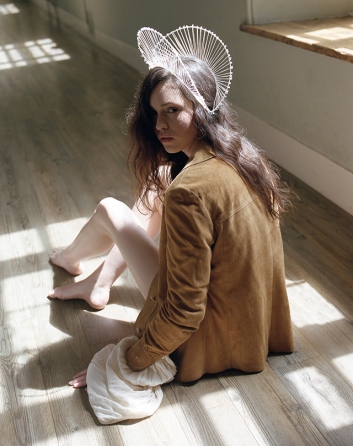 LK: It was great! It was very interesting to see the inner workings of such a large company and the collaborations that went on. That inspired me to work with more designers on a collaborative level.

Having worked in numerous cities and countries, what are your thoughts on the progress of the present-day global fashion market?

LK: I think after a long struggle to keep up with fast fashion and the ever-changing and consuming industry, the world momentarily lost sight of the value of the global fashion market. In recent times, companies large and small had to continuously change their business models and strategies to keep up with the constant challenges and the fast moving nature of fashion.

I believe and hope that it has finally reached a peak and consumers are slowly but surely thinking of sustainability.

Buyers have become more conscious of pollutants, resources and fair treatment of employees in production facilities. Also for varying reasons, one of which I believe to be a fallen economy, people are now looking to local brands and products. So after years of what had become a deflated industry, I think due to many social factors that it is progressing in the right direction

Laura Kinsella‘s millinery is available via appointments at her Dublin studio. For more information, click here.

One thought on “ONES TO WATCH: Laura Kinsella Creates Spectacular Bespoke Millinery”