The best of London Fashion Week 2012!

To sum up the DNA of the recently concluded London Fashion Week, which spans from 17 – 22 February 2012:  IT IS SHEER INNOVATION AND UNBREAKABLE IMAGINATION!

Within the 6 days, we have seen the best of British fashion; the ones that tickle our fancy, surprise us and even, intrique us. We also love the fact that gameplay for Fall/Winter this time round isn’t all dark and sombre, in fact, there were huge explosion of block colours ( a trend that has continued from the Spring/Summer 2012), impeccable graphical prints as well as an firm display of energy in all of the collections presented! The distinct and unique styles of all the designers and brands who have showed were clearly evident!

Plus, we have also seen the core concept of social media and technology being weaved into a ‘live’ portal, which was so nicely done up by London Fashion Week (at http://www.londonfashionweek.co.uk). Almost all the shows were streamed live, making it possible for people from all over the world to watch the fashion shows live from wherever they are! Now that indeed requires a stellar ovation!

To break it down, here are 5 highlights of the London Fashion Week; our pick!

If there’s anyone who will rule the prints world, she’s none other than Mary Katrantzou. The designer who has won the Emerging Talent – Ready-to-Wear award at the British Fashion Awards 2011, has since collaborated with Longchamp and Topshop. She is one who stays true to her design signature; which is a “hyperrealist aesthetic, bold graphics and industrial jewellery“, whose wearer is a woman with liberated spirit and a strong sense of style.

Seasons after seasons of mindblowing prints-galore collections, Mary Katrantzou has superceded her previous collections with her latest one, the Fall/Winter 2012 at the Somerset House during the London Fashion Week.

Her inspirations for this collection? Still life, crayon box and Victoriana

(Below is the invitation card; printed with a blownup picture of crayons, on ShowStudio’s Fashion Director, Alexander Fury’s desk)

The crayon colours has been reimagined in her collection, with green representing grass, yellow thought of in a mirage of No.2 HB Pencils and a concoction of other unconventional items serving as inspirations including clocks, hedges, telephones, spoons, forks and even, a red typewriter specially engineered into her prints!

Unlike previous collections which were done either in peplum and hourglass silhouettes, the optically-challenging prints of this latest collection were done in very dramatic silhouettes such as a godet skirt and a corsetted look; all of which emphasized the beauty of the embroidery and embellishments.

And from the looks of her brilliant talent, we see her as the next Alexander McQueen, a rising one! Certainly one to look out for! 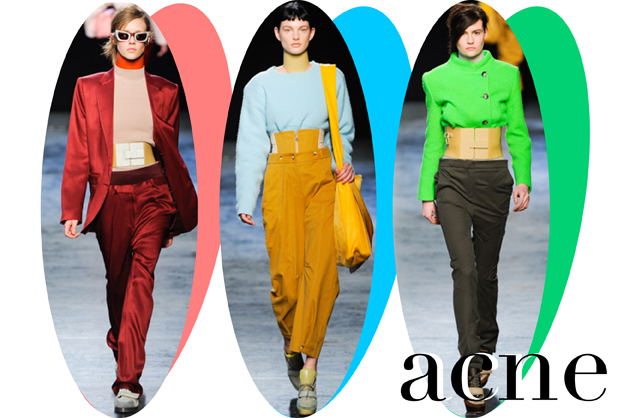 The Acne woman this season is undoubtedly an ambitious one, channeling herself in a woman’s role as well as a man’s one. Not to make it sound ambiguous, we’re actually referring to the silhouettes of the collection; fitted pieces mixed with manish-figured pieces, as well as intentionally cropped and puckered shapes that were challenging to wear yet visually-enticing.

We can’t decide too, but all we can say that this is a fresh move for Acne, with the distorted silhoutettes penned by Jonny Johansson himself.

Now a man or a woman, you decide. 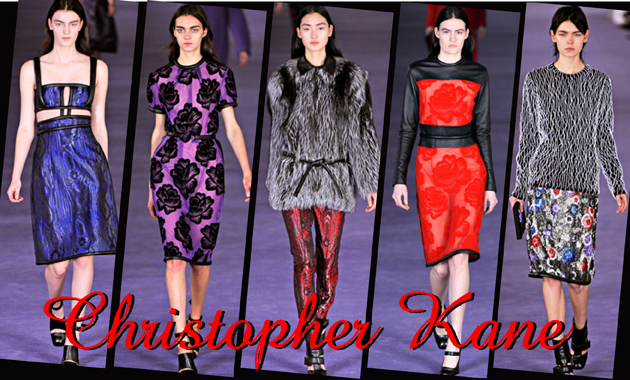 It is a dark, and sinister world at Christopher Kane this season. Moving from the optimistic edge of his previous collection in spring/summer 2012, Fall/Winter 2012’s Christopher Kane’s woman is a serial killer on the move, or at heart.
Inspired and driven by Baudelaire’s The Flowers of Evil, the reds in the collection were bright, and were liked to a ‘vial of blood’, and mesh and black velvet dominates the lurid feel of the collection. An echo of Kane’s embroidered flowers still exist, but in darker, deeper shades!
We don’t know about you, but you know what, we really love the reds in this collection! C’est magnifique! 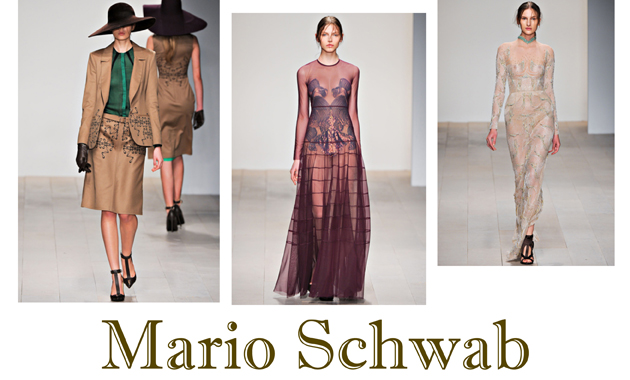 Sheers, romanticism in an equation of science and sensuality is the formula for Mario Schwab’s latest collection.
Inspired by  Marlene Dietrich and film noir as well as mathematical patterns in spirographs and harmonographs resulting in body conscious shapes. The Mario Schwab woman is one who channels an air of mystery beneath wide brim hats, “the woman you don’t know who you fall in love with”.

And did we say, we adore the beauty that lies with mysteries and the unknown? We are loving the red floor-length sheer dress to the max!

The direction of this year’s graduates from Central Saint Martin M.A.’s is simple; that is trascend beyond boundaires, inject all forms of innovations and knock-’em dead. Well, simply said, it’s clearly creative in all senses! 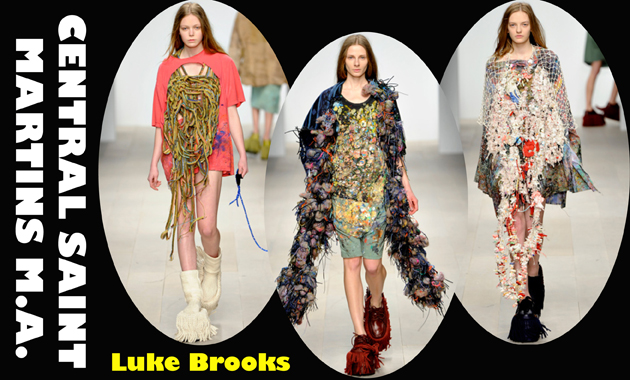 This batch of M.A. students, who are in fact, the last M.A. class to graduate from the old Saint Martins premises on Charing Cross Road, gave all out to impress and capture, and amaze in a very, very experimenting manner.
From sweeping floorlengths kookiness to insanely yet uniquely tied-up drapes as well as 3-dimensional cubic shapes, immensely out-of-the-norm fancy head gears and sweeping trials of fringes that gives the impression of hair, this year’s graduate collection really knock the audience hard, in a good way.
We’re just wondering how those looks can evolve into ready-to-wear looks by these future designers. 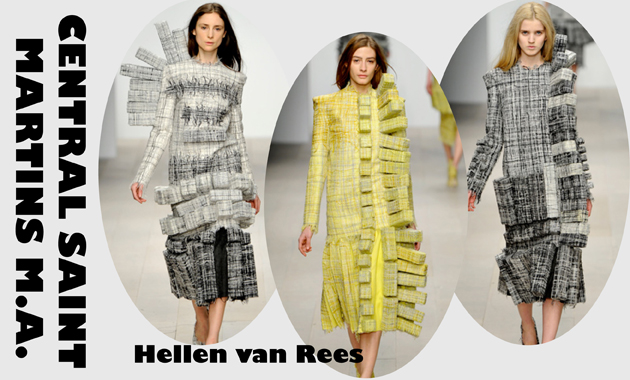 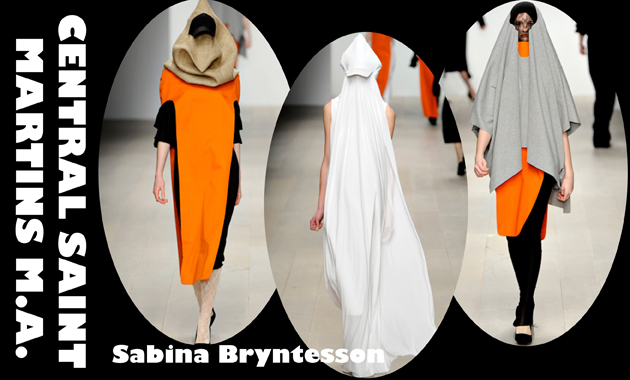 “Now that the spotlight has turned here,
London designers are daring the world.”
– Tim Blank

And this basically the reason why London Fashion Week means so much to us; we just adore such fresh innovation!
Graphic layouts by Couture Troopers using runway images from Style.com.