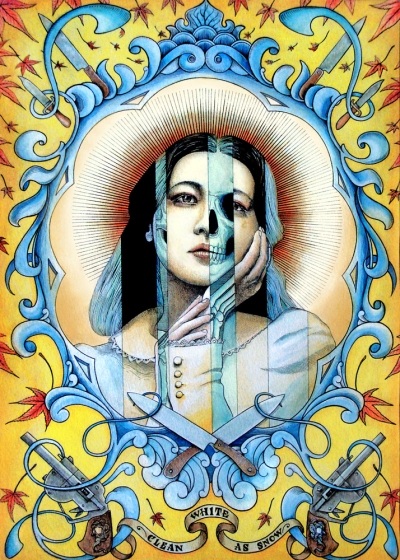 Ever wondered what it’s like to be traipsing on the opposing ends of the spectrum – the mysteries of the dark as well as the tranquility of the light – at the same time?

Daniele Aimasso is a visual artist whose art is epitomised by an assemblage of surrealistic yet compelling perspectives, eye-catching detailing and a dreamlike quality.

Hailing from Italy and having majored in graphic design in Brera Academy in the state of Milan in 2010, the 29-year-old’s medium of choice; watercolour painting and illustration with ink, allows him to explore the relationship between art and fiction – science fiction in particular – through his own personal experiences with the two fields for the past three years.

Having lived through the boredom of a monotonous life in a small town of Italy when he was younger, Aimasso aims to utilise his art as a mode for his search on the issues of the infinite.

In doing so, the artist whose inspiration comes from the men before his time, with the likes of the late-American novelist William S. Burroughs, who was also one of the three seminal writers of the Beat Generation alongside Jack Kerouac, and Brion Gysin, a painter and sound artist from Buckinghamshire, United Kingdom, fuses the philosophical aesthetics of literature into a blend of highly-stylised yet personable artistic outcomes in his sketchbook entitled ‘The Weird Book of Oddities’.

Filled to the brim, this book of his delves into the aspects of humanology, narratology and the history of ideas that stemmed from the anthology of science fiction from Asimov, Dick and Simak, to name a few.

In this interview, we speak to Aimasso to find out about the rationale behind the paradox of light and dark in his works.

JY: What originally made you want to become an artist?

DA: I believe that every human being has his own personal language to show his soul to the world. Those who are good in talking would be giving talks, changing the world with their charisma and their well-versed knowledge on topics of the world, while those who are good in writing can write motivational books and articles to shed light on interesting dialogues. Others who love doing goodwill would be those who show their compassionate side by rendering help to those in need. When I was younger, I’ve tried many ways o find out what I’m good at, and I found out that drawing is the best medium for me to communicate with the world.

JY: How would you describe your approach?

DA: I started drawing when I was a kid and I was a bit shy at that point of time, so I used to spend a lot of time with myself by reading a lot of books. While doing so, I would often try to visualise the characters from the tales in my mind. Therefore, in order to capture these imageries, I decided to draw them in my sketchbooks, and have never stopped doing so, even until now. Of course, some of the subjects drawn have changed in recent times but the original essence of the art still remains the same.

JY: Your art has an equal balance of dark feel (skulls and bones) and the portrayal of innocence (young girls) at the same time. What are you trying to communicate with this narrative of yours?

DA: My aim is to find an equilibrium in every artwork I make – an equal balance of life and death, pain and pleasure, joy and sorrow – just like life itself. I don’t like to see a work that is completely negative or completly happy; it’s not true and it’s not realistic.

Just like humans ourselves, one day we could be sad and the day after, we could find happiness. Thus, I wanted to show the concept of light and dark in my works, as well as the beautiful and ugly, and the many possible scenarios that could happen in a human life and the different perspectives the one could have. Right now, I think that death and beauty are both wonderful contrasting subjects to draw.

JY: Has anyone or anything challenged your views on art?

DA: Of course. Being one who always like to talk about the different views, I think it’s interesting to know what people think about my works so that I can learn from experience. To me, listening to critics is always a part of the game as an artist so as to be ensure that I’m on the right track.

JY: As a young artist, how do you think online resources have influenced the art being produced today?

DA: I believe the internet is a great resource for inspiration. You could find everything that you need to improve your knowledge and culture. You could even have a larger number of inputs than before. I think the internet as well as social media platforms are great avenues for artists to show the world their talent, so that more people would be able to come to know the works they have produced even if they are not famous artists.

Such functionality of the internet also drives artists to create more works than ever before, so as to be always on top. This is the reason why I see the existence of the internet as a form of great motivation as it increases creativity and refines the quality of works being produced. 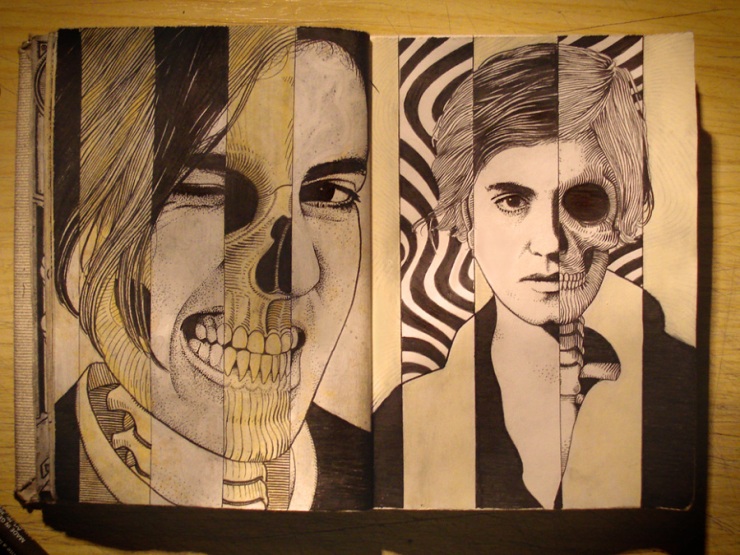 JY: What are you currently fascinated about and how is it feeding into your work?

DA: I’ve always been fascinated by the tales and legends from the different parts of the world such as the European fairytales, the culture from medieval Japan as well as to Greek mythology. I would try to infuse the symbology and charming stories that I’ve discovered by translating them as the emotional input of my works. I’m currently studying the philosophy of the 20th century, as well as quantum physics, the age of paradoxes and the big questions about the real meaning of life. I love to illustrate these situations in order find the meaning of my own life. 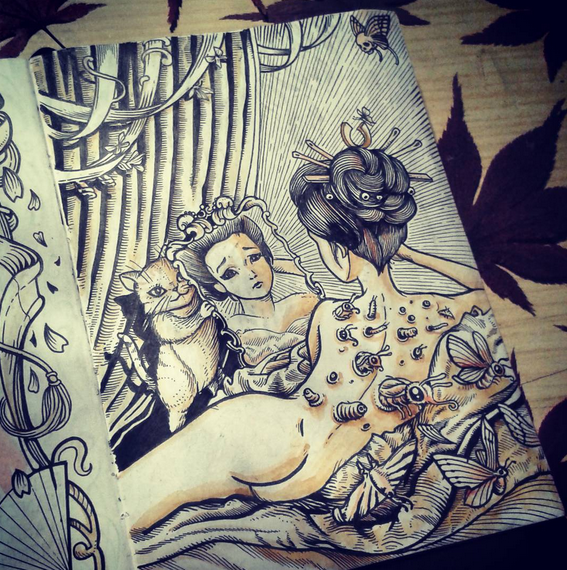 Butterflies in the Stomach, Part 1 by Daniele Aimasso

DA: I agree that art, in every form, is the language of the soul. The most important thing is that my message is read by someone, there’s nothing sadder than a monologue that no one bothers to listen to. I like to think of my art as a documentation of everything that has happened in my life. Be it an episode that makes me sad, a person who makes me happy, a movie I like, an interesting character from a tale, all of my sketchbooks are filled with these kind of artworks. I would say that my ‘Weird Book of Oddities’ is a visual journal that communicates to viewers about my every single emotion, my loves, my disappointments, my fears, my dreams and my nightmares. 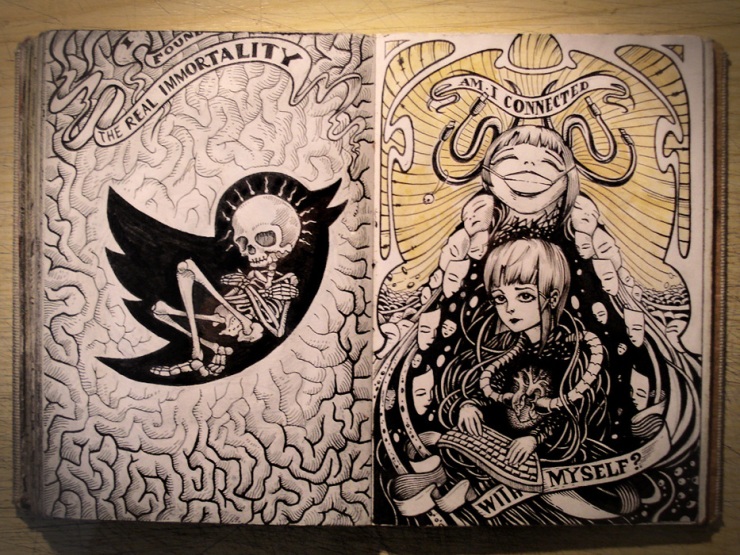 DA: My current mantra is “You are a world full of treasures. Let the others discover you.”

Check out Aimasso’s Facebook Page for more of his works.

#SPOTLIGHT: Indonesian fashion photographer Ryan Tandya creates some of the most captivating visuals based on his unconventional notion of avant garde beauty and his fascination with the intangible.
“It’s about gritting your teeth and pushing through life with a smile on your face, even though all you want to do is curl up in fetal position, cry and quit.” ❤️❤️❤️ The new, hard-hitting music video from #BrookeCandy entitled ‘Happy’, directed by #Rankin.
[SPOTLIGHT] It’s Back to the Future with House of SheldonHall’s 19th Century-inspired AWSS 2019 pieces, from dramatic ruffles to intricate embellishments. What a visual feast!
Head over heels in love with the HOWL Collective’s newest project, ‘Guo Pei - Couture Beyond’ - a fantasy-like photo story that captures the breathtakingly-gorgeous and showstopping creations from the couturier.
#Quoteoftheday: For every minute you are angry you lose sixty seconds of happiness. – Ralph Waldo Emerson
Happy Women’s Day, y’all!! ⚡️⚡️⚡️ What better way to celebrate it than to relish in this divine shot of @ladygaga as a couture goddess in @jeanpaulgoudeofficial’s work in @vmagazine!
Dolce & Gabbana’s holiday offerings from its Cruise 2019 collection are made up of fabulous accessories and arm candies that will get you the oohs and ahhs from friends at Christmas parties! (link in bio)
#Showcase: Surreal grotesque portraiture artist #AnnaTsvell takes fashion illustration to the next level with her slightly dark approach, and by going against contemporary notion of beauty with exaggerated proportions and features.
FOLLOW @COUTURETROOPERSMAG
Loading Comments...
%d bloggers like this: