In true blue yearbook style, the ‘Class of 2016’ campaign by eyewear company Luxottica brings together a cast of emerging and established faces from the worlds of fashion, design and music – all of whom are unique and iconic in their own genres.

Shot in New York by Fumi Nagasaka and styled by Elizabeth Fraser-Bell, each of them represents the different high school stereotypes. 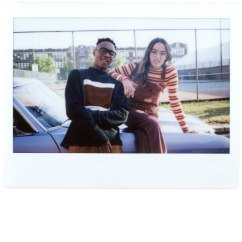 Instagram fashion star Mike the Ruler takes the role of the newly-elected class President whose astute cultural observations are the go-to style playbook for his fellow pupils, while the super cool French-Canadian-Chinese model Mae Lapres is the Prom Queen that everyone wants to be friends with.

And of course, there’s always a nerd and a (day) dreamer in the class. In this instance, the former role belongs to 23-year-old Irish rapper Rejjie Snow (despite his tattoos) for his smooth storytelling and razor-sharp flow, while the latter is none other than the 16-year-old photographer Gray Sorrenti (yes, she’s the daughter of Mario Sorrenti), who channels magic and mystery effortlessly.

American actress, model and writer Hari Nef takes the lead as class teacher by encouraging her students to “live authentically and avoid complacency”.

Our favourite role would have to be the Rebel, which is played excellently by the 93-year-old fashion diva Iris Apfel, who is coined saying: “fashion rules are stupid – it depends who’s wearing it and how they wear it! I don’t like rules because I think they’re there to be broken. People should be original, and try.”

Together, despite their oddly dysfunctional roles, they prove that glasses are still very much an every-season accessory, even in the 21st Century.