And here it is, one of our all-time favourite sports brand, NIKE is celebrating the grand 40th Anniversary of their Cortez range, a rich history in running and innovation since it’s introduction in 1972 by U.S. Running Coach Bill Bowerman as Nike’s first lightweight running shoes.

In Southeast Asia alone, five countries, namely Malaysia, Indonesia, Thailand, the Philippines and Singapore have each seek out eight of the best talents in the various fields from each country to customize a Nike Cortez, forming a grand total of 40 pairs of uniquely designed Cortez shoes, which will then be store as part of Nike’s archive.

Hosted by radio deejay, Daniel Ong, the final celebration in Singapore which has took place at Limited Edt Chamber, Marina Bay Sands yesterday simply hold no bars, showcasing and unveiling of all 8 pairs of very artistic renditions of Cortez shoes, specially designed and handcrafted by eight Singapore personalities  to reflect their own personality, style and sensibilities, including leather bag designer, Ling Wu, Head of Entertainment at Zouk, Wayne Lee and famed Rap Artist, Sheikh Haikel to name a few, all from the fields of fashion, entertainment, music, sports and the arts.

With a huge centrepiece birthday cake shaped to look like a Cortez shoes right in the middle of the store, and a secret vault of ‘fame’ which holds many limited edition Cortez shoes, we say let your hair down and party to Nike Cortez’s 40th birthday, and of course, check out these awesome shoes!

Let’s hear what these personalities have to say on their experience with Nike Cortez:

First up is none other than homegrown leather bag designer, Ling Wu whose bag line holds a dear place in our heart.

Known for her ability to weld a palette of style through choice of premium and unique materials in her bags, Ling Wu’s mix of styles when incorporated to the Cortez shoe truly push to the extremes in her rendition of the shoe, weaving a seamless train of design thoughts through a streamlined placements of rockability gold studs. The shoe also features vibrant orange python skin and of course, to top it all, neon yellow lacing that steers towards a very spontaneous look in organic form.

One of our favourites from the lot!

For Artist and Creative Director of The Lo&Behold Group, Mriz Sidah, his love for art is truly commendable, evident from his shoe design which was fueled basically by “his love for making art”.

His shoe name, for one, is simply iconic – “WHAT THE FLUX!” This would definitely sound familiar to you because he’s basically the guy who has instrumented The FLUX Take-Out Series, a studio-simulatation show which actually circulates the happenings in the concept of an artist’s studio, cultivating and documenting the whole art-making process.

And with this shoe design, in it’s full colour glory, it’s truly impossible not to love art!

Wayne Lee, the guy who heads the forefront of entertainment in Singapore and Asia’s mecca of dance music, Zouk is clearly one formidable figure who seriously pushes the beat of fashion, music, art and nightlife to it’s stratosphere (You might also remember him as the former Editor-in-Chief of JUICE Magazine, for that matter).

That’s right, for someone like him, the design is simple, uncomplicated yet bold. When asked “Why is the shoe black in colour?’, he replied firmly with “I love black”.

We can’t rejoice further than that, especially with those striking ‘Dark’ and ‘Light’ words etched on the shoes, which are really hard to miss.

And of course, the diagonal stripes radiating on the shoe led us into thinking that this is truly a Star Wars moment with light sabers and both dark and light side (our own interpretation, honestly).

Put your hands up for Sheikh Haikel! The fun-loving, loud-mouthed rap artist is here with his rendition of the Nike Cortez in a really spontaneous way, and there’s actually a story behind it!

One look at the shoe, and you can immediately pick out these three standout components: firstly Camouflage prints in the Nike logo; purely because of  his love for camouflage prints and also, when worn, it makes him look slim as it will ‘camouflage’ him.

Secondly, the names ‘Triqka’ and ‘Abbra’, which are actually the names of his kids; he shared a story of how sometimes his kids can be very annoying and he just wish to kick them. But as their father, he can’t actually do that, but with their names on his shoes, he can now “kick them”. (pun intended)

And of course, the last component is the crescent moon and the five stars to pay homage to his love for Singapore: his country and home. 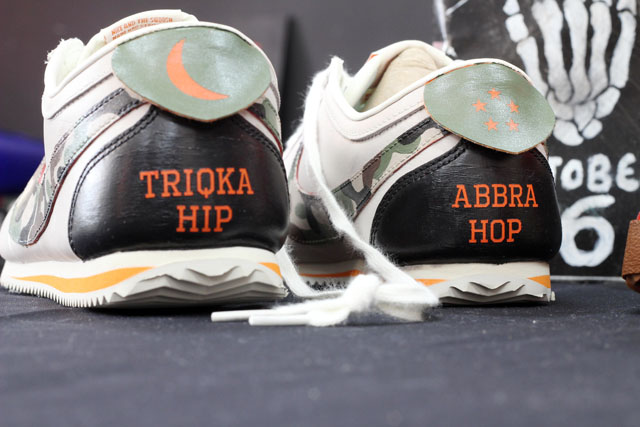 Create your art on the wall like you mean it, especially for Luthfi Mustafah, who is best known as The Killer Gerbil. As a graffiti visual artist, he is very much inspired by street culture, urban art and his pet gerbils (which explain his artist name).

He has also been involved in numerous commissioned works, events and exhibitions locally and overseas, skyrocketting his Killer Gerbill as the icon for expressing creativity and disclosure through various mediums.

His pair of Cortez sneakers is no wonder the pioneer of spontaneous graffiti drawings, which feature some iconic elements including “+65” (which is the country code for Singapore), bright orange colour palete, some arrow signs and scribbled illustrations.

We can’t help but be in love with his prominent style of graffiti in this shoe design.

No number of sneakers is ever enough for Sebestian Tay, who is a mad lover of sneakers and actually has an impressive collection of over 600 sneakers, espcially limited-edition lifestyle sneakers & counting to date. 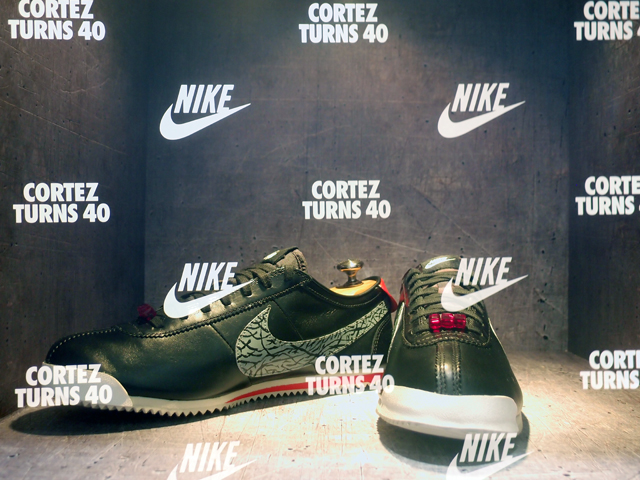 That’s right, inviting him to design a sneaker was definitely the most obvious thing to do.

Inspired and driven by his love for the hi-cut Nike Jordan 3, he has incorporated the stiching effect as well as a colour palette of red and black into his creation! Pretty sublime, we’d say!

Nothing can quite sum up the elegance of this pair of shoes by Nike Athlete and Marathoner, Anne Qihui whose love for running have inspired her in this design.

Discovering her passion for sports at the tender age of 8, Anne has taken part in all sorts of races from 100m to 800m to long marathons and even sports like hockey, making her a runnning sensation of today!

For her pair of the Cortez, she has incorprated several dynamically placed running figures against a nicely glossed metallic silver background which is simply testament to her passion for running!

Undoubtedly the sportswoman of our country! 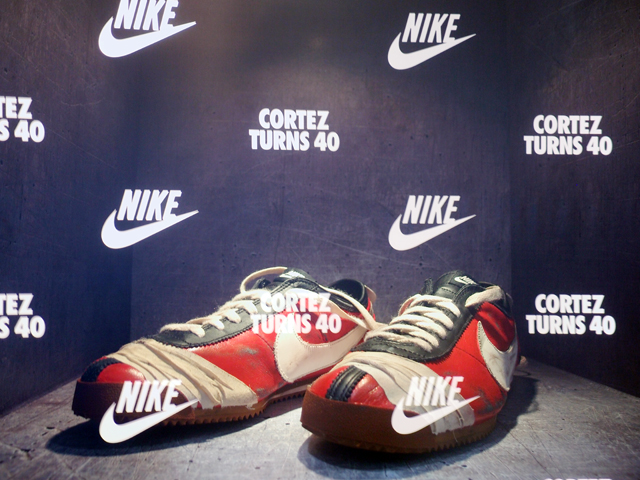 With a bandaged shoe front, a battered and torn effect, this shoe by the tough and strong Nicole Chua demonstrates a scene of a fighting match with a strong hue of red – a representation of the boxing gloves used in a match and also, blood, sweat and tears which are basically the components of being a martial arts fighter, be it in a duel or in training.

This pair of shoes is simply a showcase of the test of strength and stamina, truly proving the spirit of a fighter; a fighting spirit – which is what every sportsmen or martial artists, for that matter, should possess, linking ideally with the Nike Cortez lifestyle.

With these eight shoes, we now have the grand total of 40 pairs, marking the milestone of years in Nike’s innovation in sportswear.

So here it is HAPPY 40th BIRTHDAY NIKE CORTEZ!

Do check out the 8 pairs of Nike Cortez customized by the Singapore personalities, on display at Limited Edt Chamber, B2-23, Canal Level, The Shoppes at Marina Bay Sands from now till 15 July 2012!
.
Celebratory special effects in photos created by Felly (Couture Troopers) on her camera
(no photoshopping has been involved)

#SPOTLIGHT: Indonesian fashion photographer Ryan Tandya creates some of the most captivating visuals based on his unconventional notion of avant garde beauty and his fascination with the intangible.
“It’s about gritting your teeth and pushing through life with a smile on your face, even though all you want to do is curl up in fetal position, cry and quit.” ❤️❤️❤️ The new, hard-hitting music video from #BrookeCandy entitled ‘Happy’, directed by #Rankin.
[SPOTLIGHT] It’s Back to the Future with House of SheldonHall’s 19th Century-inspired AWSS 2019 pieces, from dramatic ruffles to intricate embellishments. What a visual feast!
Head over heels in love with the HOWL Collective’s newest project, ‘Guo Pei - Couture Beyond’ - a fantasy-like photo story that captures the breathtakingly-gorgeous and showstopping creations from the couturier.
#Quoteoftheday: For every minute you are angry you lose sixty seconds of happiness. – Ralph Waldo Emerson
Happy Women’s Day, y’all!! ⚡️⚡️⚡️ What better way to celebrate it than to relish in this divine shot of @ladygaga as a couture goddess in @jeanpaulgoudeofficial’s work in @vmagazine!
Dolce & Gabbana’s holiday offerings from its Cruise 2019 collection are made up of fabulous accessories and arm candies that will get you the oohs and ahhs from friends at Christmas parties! (link in bio)
#Showcase: Surreal grotesque portraiture artist #AnnaTsvell takes fashion illustration to the next level with her slightly dark approach, and by going against contemporary notion of beauty with exaggerated proportions and features.
FOLLOW @COUTURETROOPERSMAG
Loading Comments...
Comment
×
<span>%d</span> bloggers like this: