A batch of fashion design students stand before me, but who will make the cut?

It’s that time of the year again: the time when student hopefuls from the final year of fashion degree programmes in Singapore start churning out their graduating collections and showcasing them on the runway.

These include a display of all the skills and techniques they have learnt so far and communicating their identity as a designer. Through their creativity, of course. Be it in their selection of fabrics, treatments or manipulation in flat patternmaking and draping, or a crossover from menswear to womenswear and vice versa, which is very much on-trend in recent years. Topped by an interesting, if not, boundary-breaking concept for each collection aimed to shake up the status quo. These are no doubt elements that will make or break a budding fashion designer.

Despite the clear-cut formula though, it is definitely not as straightforward as it may seem.

You see, one major problem that plagues students every year is the dilemma between a safer, more wearable approach, or taking risks by going with an over-the-top route, sprinkled with showstopper looks.

While the former will easily and most certainly land you future jobs, the latter proves to be more effective for design students who wish to start their own fashion labels and who wish to garner as much media coverage as possible.

As they’d say, school is indeed the place to find your voice and to experiment to your heart’s delight, so what better way than to do so in your final year collection?

The Couture Troopers team was invited to the LASALLE x TANGS show, which was jointly presented by Singapore Fashion Week on Thursday, 5 May 2016, to witness the works of the 2016 graduating cohort of LASALLE College of the Arts’ Fashion Design BA (Hons) Degree programme. 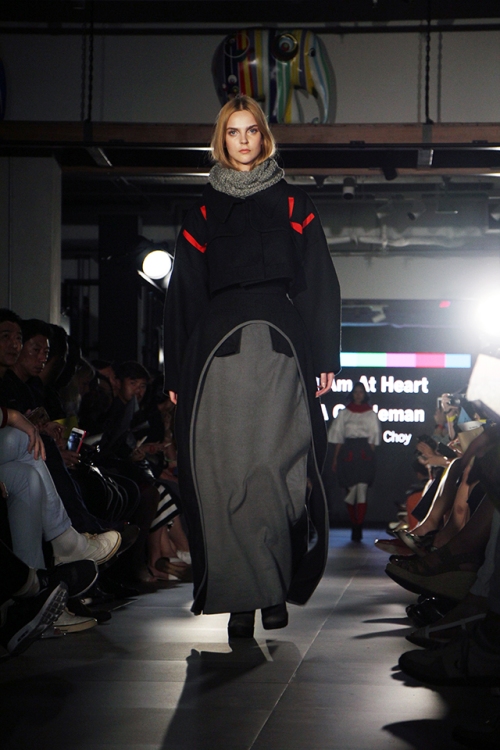 I AM AT HEART A GENTLEMEN by Esther Choy

Consistent and well-executed, and by far our favourite collection of the night, it was clear that a lot of thought and considerations have been put into the creation of her designs.

Poised to channel the style of film actress Marlene Dietrich and her “Trousers Craze” in the 1930s, Esther Choy‘s collection incorporated the beauty of menswear tailoring into womenswear silhouettes.

From boxy shapes to rolled turtleneck collars perpetuated by a palette of red, black, white and grey, as well as a dramatic curve at the hemlines with a dropped back, to a masterful take on knitted fabrics, known to be more difficult to sew due to their stretchability and curling edges. The designer was indeed faithful to her concept and her craft in garment-making.

Seriously, if the weather in Singapore is way kinder, we would wear this collection in a heartbeat.

UNTO TEE by Lionel Low

With an eponymous womenswear brand currently under his belt, alongside years of experience as one half of now-defunct fashion label Lion Earl, Lionel Low is most certainly not a rookie designer. With that, of course, comes expectations.

As with every audience at the show, I was looking forward to his collection. He was afterall the second runner-up at the Harper’s Bazaar Asia New Generation Fashion Designer Award in 2015, and was known for his genre-defying designs.

Despite the high hopes, several disappointing looks emerged. The polarising dosages of black mesh amidst the draped garments in flaming red colour look disarrayed and irrelevant.

The above look was no doubt the sole saving grace of the collection. An off-the-shoulder toga knee grazing dress with pinched folds and waterfall drapes, topped with an inner high neck cutaway mesh bodice in deep red.

According to Low, his collection was an experimental attempt to fuse the sculpting techniques and the Neo Japanese concept of “wabi sabi” whilst portraying the state of serenity of a painter at work.

What works for this collection was the designer duo’s adept skill in putting a contemporary spin on beautiful Batik motifs from Southeast Asia, more notably Java, Indonesia, and translating them into abstract silk screen prints and array of macrame knots.

The modern cuts infused, such as the wrap skirts, pencil skirts, cropped tops and flared pants in contrasting colours of orange and blue, do elevate the pieces into a covetable status, with most of them well-suited for Singapore’s weather.

No wonder “Tik Anyar” is one of the collections selected for the LASALLE x Tangs Pop Up Store.

This is one collection that shouldn’t be taken in a literal manner.

For starters, Valerie Chan‘s creations hele no resemblance to the Elephant Man – the designer’s inspiration and a disfigured resident at the London circus freak show in the 19th Century.

As for the oxymoron “Pretty Ugly,” there was certainly more than meets the eye.

Given the overdose of frills and more flounces seen on the runway, perhaps the idea of the collection was to conceal ugliness with guises: layers upon layers of fabrics. And perhaps, the designer was aiming for a childlike à la Toddlers and Tiaras’ style.

While we found some of these ‘excess’ unnecessary, we like the above for its easy-wearing, ruffle sleeved organza shirt as well as the semi sheer tulle skirt with cerulean-coloured gathered frills. I can easily see these as separates which can be paired with a slim-fit black leather skirt and a white shirt respectively.

If there was one thing to remember this collection by, it would be fringe – lots of it.

“Pandora Box” was indeed a series of clothing conjured based on a similarly titled silent film in 1929, about a story of a woman who grew more powerful and desirable by tempting men with her beauty and siren charms.

And while it may or may not be a coincidence that the overall feel of the designer duo’s designs, especially the white one in the above, held a significant bearing to Rodarte’s Spring/Summer 2013 collection, the looks were also reminiscent of the 1920s flapper dresses and the ‘swaying’ effect that they were known for. 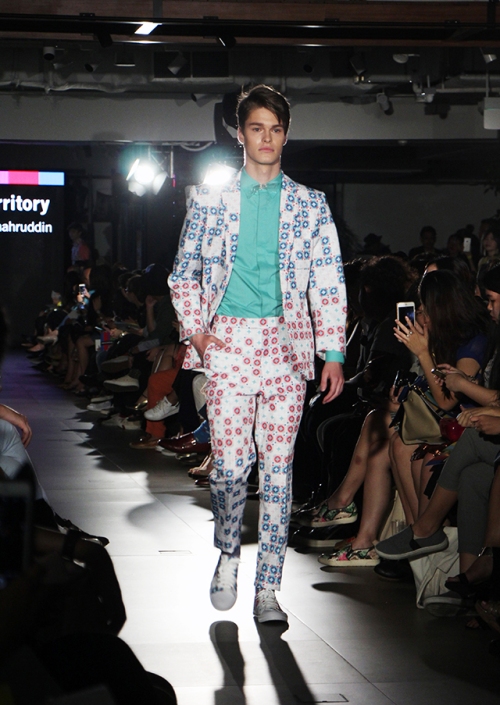 Despite the surprise soar in the overall growth of menswear last year, which was reported to be 24% according to a study conducted by Barclays, the problem that pegs most menswear collections on the runway is still the sensibility … or rather, the insensibility of the designs. How many times have you actually found yourself cringing upon the sight of unmanly collections after collections at Men’s Fashion Weeks, wondering who on earth would wear that man dress (seriously!), with frills and ruffles no less. Or that head-to-toe pink floral printed garb that looks like it belongs in a female’s wardrobe. Clearly the designers are trying to outdo themselves, but are they missing the point of the MEN in the menswear altogether?

This is the reason why I was actually feeling afraid for the designer Siti Aishah when the first look of her collection graced the runway. Composed of vibrant colours and patterned from head-to-toe, these are elements that would lead anyone to believe that she is running at a risk of producing an effeminate menswear collection.

But thankfully, that wasn’t the case for the designer. As more looks rolled out, I realised that despite her key ingredient; prints fashioned out of the colourful patterns on Peranakan tiles, her collection paid strict adherence to traditional menswear tailoring whilst exuding a dapper and smart look.

The jackets and coats can be styled with any solid coloured shirt, and likewise with the patterned trousers. The cutting of the garments were considerably form-fitted and three-dimensional. The detailing such as the collar and style of the jacket lapel was fresh and modern. Clearly a collection made and designed sensibly with the male wearer in mind.

Most importantly, it was truly genius of the designer to look toward the tradition of Straits Chinese in her attempt to bring forth a revitalisation and renewal of interest in the dying culture. 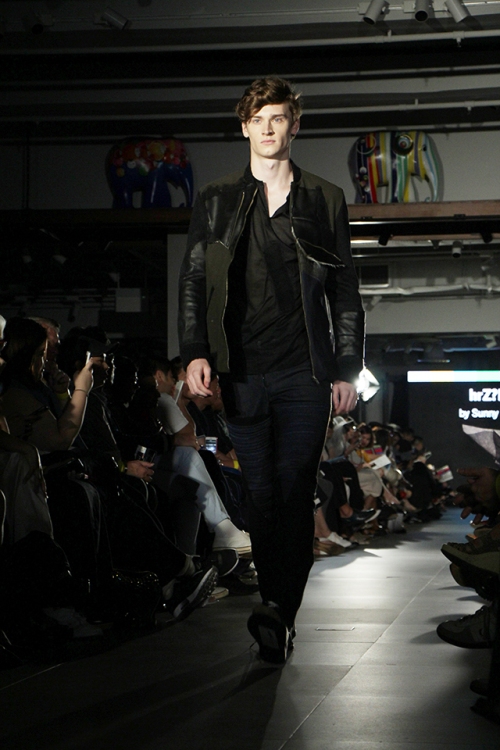 As is the case with Lionel Low, it was perfectly normal for anyone to uphold high expectations for Sunny Lim. He was after all an experienced designer himself despite his student status. The brainchild of the now-defunct MILS, a menswear label that had managed to come out of Singapore’s shores, landed itself in places such as Wut Berlin in Tokyo and Mercedes-Benz Fashion Week Australia in 2012, Lim was often lauded for his unconventional approach in design, by injecting unexpected and interesting surprises within his garments.

As someone who was all too familiar with the designer’s aesthetics, it was safe to say that “hrZ?K” with its dark coloured rocker vibe was all too predictable. According to the designer, he was trying to “alter the language of dress by eliminating dress rules and structures” and “challenge the accepted notions of what a garment is” by taking on the “opposite, irrational approach in design.”

Perhaps he was trying to create a more innate and more intuitive experience for the wearer. The insulation material attached to the forepart of the jackets clearly gave off the notion that he was trying to blend the idea of a leather jacket with a down jacket, merging the value of aesthetics with functionality in its respective manner.

And perhaps his idea of irrationality was really all about the deconstruction and reconstruction of tailoring, piecing random things together in the style of the DADA movement’s displacement technique, such as the attachment of wool patches and flyaway leather flaps.

He also deliberately lengthened a sleeve in quilted fabric on one side while maintaining normality for the other side, creating an offbeat silhouette and questioning the very principle of balance in design.

While the collection was decidedly avant-garde and poetic with subtle hints of mystery all at the same time, it was definitely one that aimed to be a game changer, just not a groundbreaking one.

The “SEE NOW BUY NOW” straight-to-consumer initiative was made possible by IDA Singapore and Metail, a virtual fitting room startup.

Selected looks from the LASALLE x TANGS show are now available at the pop up store located on level 2 of Tangs Orchard, from 5 May to 26 May 2016.