If the new COACH‘s new limited edition NASA capsule collection, is giving you some 70s space vibe with a little dose of the Back to the Future film vibes, we don’t blame you.

In fact, that’s what COACH SPACE is all about.

It is a celebration of American dreamers, past and present, who have embarked on space explorations.

From Alan Shepard, who was the first American to fly into space in 1961, to John Glenn’s historic flight to orbit Earth in 1962, as well as Neil Armstrong who took “a giant step for mankind” in 1969, by landing on the moon and returning back to Earth safely.

As such, the collection, which combines craftsmanship and utility, comprises of leather bags emblazoned with customised patches: motifs of space, such as Apollo rockets and embossed NASA-inspired logos.

Rexy the Coach Dino also makes an appearance, decked in an astronaut helmet and jetpack blasting off to explore the unknown.

The collection is very nostalgic. There’s something about the time of the Space Program that just gives this feeling of possibility. The space references, rockets and planets are symbolic of a moment of ultimate American optimism and togetherness.

The Rogue Bag 25 bag (above left) in glovetanned pebbled leather is elegant with a playful hint; a rocket waiting to take off in a space orbit. The Dylan Bag (above right), on the other hand, is an updated take on flight bags from the 1970s. 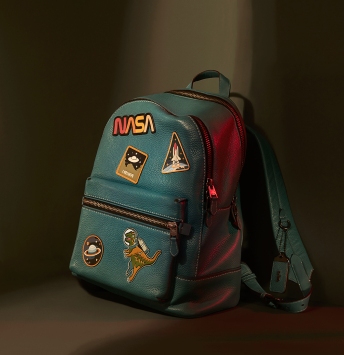 Remember the school bags in the 80s? The League Backpack (above left) with its vast number of vibrant batches is a massive throwback fit for explorers and fearless travelers.

Coach Space is now available in all Coach stores.