EXCLUSIVE INTERVIEW: Sugar & Spice with the Cast of Hansel and Gretel!

If I hear the words “Christmas is not fun”, I will immediately call you a ‘liar’, and maybe even pack you up and hand you over to actor Sebastian Tan, who acts as the wicked witch here. He will gladly cook you in his pot of enchanting soup.

Yes, you’ve heard it right. Things are totally not normal, not what it seems and have never gotten more interesting than this.

Seriously, what do you get when you take Hansel & Gretel, the well-known Brothers Grimm fairytale for a spin in a comedic, family entertainment way? You’d still get your Hansel & Gretel, but maybe just totally not what you expect it to be.

For one, this must-see Christmas pantomime, which will be kick-starting next week, from 22 November – 15 December 2012, is directed by celebrated actress Pam Oei of the Dim Sum Dolly cabaret.

It is packed with fun, loaded with musical numbers and is VERY local – true to the W!LD RICE‘s tradition!

With a typical story of “I’ve got a new stepmother (Vernetta Lopez) and she’s a pop-star-wannabe who dreams of going to Hollywood and needless to say, she doesn’t like us very much,” the play dwells on how the twins Hansel (Dwyane Tan) & Gretel (Denise Tan) were abandoned by their stepmother, due to tight family budget, and a henpecked father (Dwayne Lau) who is so smitten with his wife and didn’t know how to stop his wife from sending his kids away.

So the siblings suddenly found themselves fending for each other in the jungles of Mandai – a place where all things strange happen, and after they have set foot into the tastiest looking house, owned by none other than the mysterious Wicked Witch (Sebastian Tan).

This is where you will witness how the siblings fight for their lives as the wicked witch, who is also a chef, is out looking for her missing ingredients – THEM.

Plus at the same time, they meet other weird characters like the spunky rapper Nicki Minah (Siti Khalijah Zainah), the Chef’s assistant who is hiding some sort of secret identity.

Will their father make it in time to save his kids, or even lend a helping hand? We’ll see!

But before we dwell too much into the plot and what-not, we can’t be more excited to interview the cast who will gladly tickle our fancy and light up our faces in their own ways.

BREWING MISCHIEVES UNDER HER (HIS) SLEEVES

To start the ball rolling, of course, we’d have to speak to Sebastian Tan. Best known for his very comical ‘Broadway Beng’ play, the actor will be cross-dressing as a female to play the role of the Witch.

That alone is enough to cause quite the sensation, leaving us with heart-burning questions to ask this talented and very funny man:

Sebastian: She is a brilliant, eccentric, schizo chef Extraordinaire who lives somewhere in our deep deep local forest in a extraordinary house made of all our favourite Singaporean food! She has every secret recipe and ingredients she needs except for one or two….HANSEL AND GRETEL.

How is this role different from other roles that you have acted?

Sebastian: For one, I’m playing woman and although I had played a woman in 2 other shows (one was as a cross dresser and the other, a Queen), I should think this time as a chef with all the characteristics stated above, she’ll be quite different…but we’ll see…

Since you’re acting as the chef in this musical, do you cook in real life?

Sebastian: Oh yes I do, I love to cook!

If you can eat one local food for the rest of your life, what would it be?

Sebastian: This is a cruel question! To choose ONLY one??? Impossible! Laksa? Chilli crab? Chicken rice?….

Did your interests in broadways and acting started since young?

Sebastian: Not too young…I was forced into a story telling competition in kindergarten and hated it! It wasn’t until

I was 15 years old and took part in a school play and won ‘Best supporting actor’ in the inaugural ‘Young people’s theatre festival’ that I caught the acting bug.

Will you be directing anymore musicals in the near future? And any hint at what you would do after this musical?

Sebastian: I would love to direct another musical. There are talks for me directing next year but we’ll see. My next show might be a play or movie but for sure, we are bringing back a brand new Broadway Beng show!:-)

What do you like to do during your free time?

What’s the worst part about being an actor?

Sebastian: No one takes me seriously.

What’s the best part of being an actor?

Sebastian: No one takes me seriously.

Do you have anything to say to all the aspiring actors out there?

Sebastian: Don’t take it too seriously. Have fun! Live life! 🙂

GETTING TO KNOW GRETEL’S TALE

She may not act her age, but that’s exactly what makes the audience love Denise Tan!

Her affinity with theatre is affirmed through The Little Shop of Horrors (as Audrey), Beauty World (as Lulu), Fried Rice Paradise (as Bee Lean), and even in Sebastian’s play, Broadway Beng.

But before we see her in two ponytails as the little Gretel, we ask her about her role and of course, FOOD! 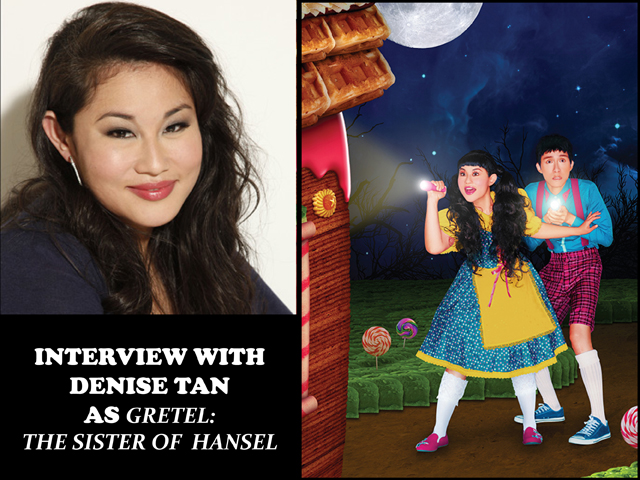 Tell me more about your role as Gretel.

Denise Tan: This very Singaporean version of Gretel I play is a feisty tomboy with a sharp tongue and a soft heart. She cares deeply about her family and though is always bickering with her twin (though very different) brother, she’s very protective of him and is always ready to jump to his defence. She’s Garang, Gregarious and Greedy!

How is this role different from other roles that you have acted as?

Denise Tan: Well, for one, I’m playing a character who’s still in Primary School onstage, whereas off-stage, I left my schooldays behind decades ago!

And I’ve never played a twin before, but it’s great to always have that “twin support” and to have Dwayne Tan (Hansel) with me onstage all the time. Building a believable sibling relationship will be a new experience for me and I think that singing duets with beautiful harmonies all through the show will be a challenge that will pay off!

Do you take any reference from any young girl to make your role as Gretel believable?

Denise Tan: I think I’m still very much the same girl was when I was Gretel’s age and I don’t think it’s a stretch at all to play the character, because of her personality, which is quite similar to mine!

But if I run into any trouble during rehearsals, I have a niece who is exactly Gretel’s age, whom I can take notes from!

This play includes FOOD. What are your ultimate favourite local delicacies?

What is your favourite part of this musical play?

Denise Tan: The food references, the snacking and the really fun musical numbers.

How was it like working with the other actors/actresses in this musical?

Denise Tan: Good fun, of course. Most of us have worked closely together before and because it’s a compact cast (only 6 of us), we have more time to bond. But ask me again later in the rehearsal process when the 15-30 children are added into the mix! It should be chaos, but in a good way! 🙂

Did you face any difficulties during the whole process of this musical play?

Denise Tan: It’s only day 2 of rehearsals, so no, not yet.

THE STEPMOTHER WHO LOVES TO SING

And of course, last but not least, we speak to Vernetta Lopez, who has put on her evil stepmum shoes, and will be prancing in a superstar dream (without the kids!)

This is probably one of those few times you’d see her in her selfish, bad side, but we know what a natural she is, especially since the heydays of 1994 (we were kids back then!) in the Singapore hit TV sitcom, ‘Under One Roof’.

So let’s hear it from her: 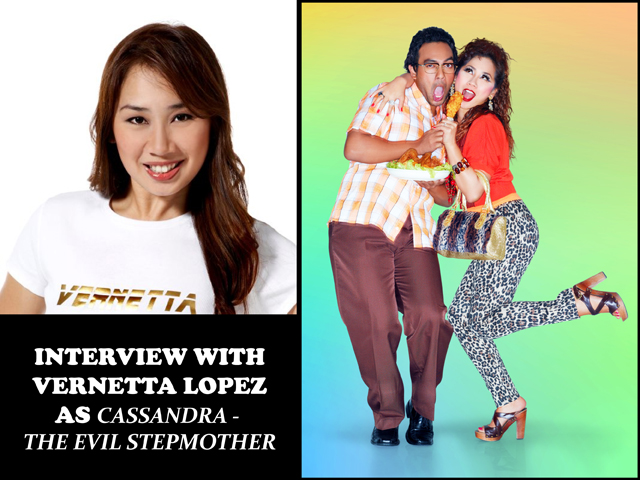 Hi Vernetta, have you ever played someone of the opposite gender?

Vernetta: Actually, yes! Cross dressing is more a man thing but I have had the pleasure of portraying Freud! This was on ‘Under One Roof’ where Paul was having a horrible nightmare in which Freud was expounding the very fear that Paul had; that his wife was wearing the pants in the relationship. In my book, ‘Memoirs of a DJ’ I describe how my makeup was cause for amusement for me on the day of the filming…. Other than that, I can’t remember playing anyone else of the opposite gender!

What is the strangest thing that a role has required you to do?

Vernetta: It would have to be Zero Hero where I had to act with 5 different husbands, and one of them was a dog! A real dog! And the other was a penguin! A fake penguin! And a Pierre Png! A real Pierre Png! And … you get the idea. It was very fun and most interesting trying to get a reaction from a toy stuffed penguin. He was most generous.

How do you memorise a lot of lines?

Vernetta: It starts with getting the gist of the scene, then its the flow of what happens logically, then its which line is just before mine and that acts like a cue, and finally the rest is about going over and over the script bit by bit until i end up memorising it!

Have you ever forgotten your lines, or a prop, or choreography during a performance? What happened?

Vernetta: It was during the Mr Kiasu play. I was acting as a twin weather girl and I totally blacked out and just couldn’t remember the lines! It was a terrible moment fluffing ang huffin’ and finally it came back to me! Awful.

What are some of the local food that you can’t stand or find it weird-tasting?

Vernetta: I can’t think of anything that I don’t like! I know there’s a fermented bean that’s a japanese cuisine that tastes like saliva. CanNOT take it! It’s terrible! Yecch!

Catch this must-see comedic musical at the Drama Centre Theatre, from 22 November – 15 December 2012!

Ticket price starts from $39 to $69 at SISTIC ticketing.

WE’LL SEE YOU THERE!