INTERVIEW: Epitome of Glam-Rock with On Aura Tout Vu at French Couture Week 2012

With an inclination to spur surprises on the fashion runway, the couture label by head designers Livia Stoianova and Yassen Samoilov are well-known for creating runways that are almost akin to a fantasy fashion world which comes alive straight out from a storybook.

Every collection thought out by the duo are by no means dull or boring. They encapsulate the true spirit of couture, and that is, to tell a story.

In their first-ever-show in Singapore, they first surprised us with not just one, but two couture collections. Entitled “High Light  Fire” and “Somewhere Else Kingdom” respectively, they showcased an array of very defined glam rock styles that the great maestro of that genre David Bowie would be extremely proud of. 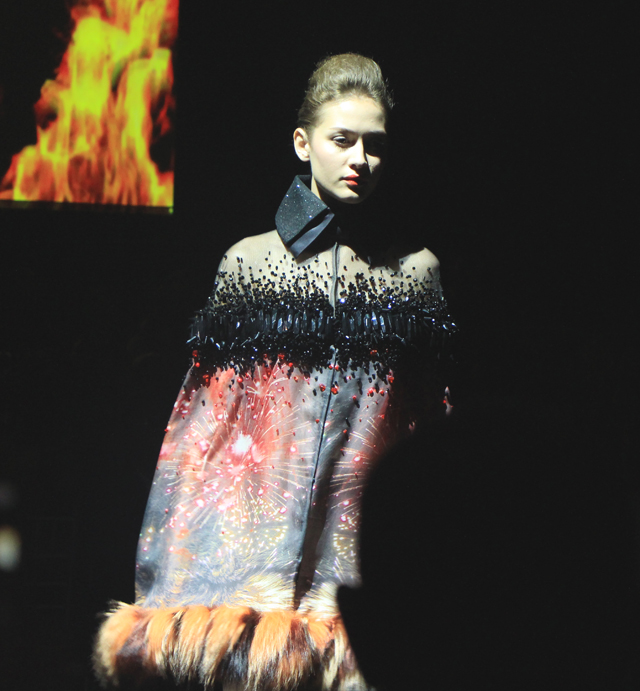 Opening the show with a convulsion of rising flames, the vibrancy of the thermal matter is translated in an astute incorporation of bright colours, exploding fireworks, bold houndstooth as well as the ever-intriguing prints of the galaxy.

The collection echoes hints of progression and dynamism of heat through the density of well-spread rhinestones, overlapping double collars, harnesses and even a voluminous transfiguration of fur and detailed sheers that show the veiny side of things in forms of laces.

There is, without a doubt, a sense of adrenaline of what a world on flames is all about. Nothing slow but rather, rapid and fast.

In this collection, every women is a Queen, and gowns fit for royalty was the game for this collection. Long, feathery gowns that transcend that of angels, raptures of frills and chiffon, as well as excessive diamantes ruled the runway in a way a Queen would rule her kingdom.

It really is “more is more” as impressive and intricate detailing take centre-stage in her highness’s most finest and delicate wardrobe.

Most importantly, On Aura Tout Vu portrayed that it is possible to create fairytales in fashion, something that is very different from the usual Couture that we see these days.

They closed their high-octane couture show with a model dressed as the ultimate Queen in her extravagant glory of diamantes and bellowing pure white gown and her companions – two centaurs from the Greek Mythology to an astounding applause and ravings.

And for this, I must say that it is really not easy to impress anyone in this day and age since the definition of couture these days has been pushed to the pinnacle. Mere quality-focused gowns could not even stir or warm the hearts of the audience these days, the demand for couture these days is one that is filled with earnest feelings for concept plus quality.

The insatiable hype is definitely on clothes that stir emotions through it’s designs, an intensive palette of detailings and out-of-the-box techniques. People wants to be surprised, intrigued, impressed and even, talked to.

In order to capture the hearts of the audience, clothes these days have to tell a powerful story and On Aura Tout Vu’s majestic wardrobe of gowns does just that.

This is no doubt a case of couture at it’s best, where magic truly coincides with the storytelling of majestic worlds in fashion.

In totality, both collections simply exude tremendous doses of originality where the focus isn’t just about fit or tailoring but rather, it’s about clothes that bring you through never-ending plots and suspense, adventures after adventures.

Just like the saying goes “We live in a wonderful world that is full of beauty, charm and adventure. There is no end to the adventures we can have if only we seek them with our eyes open.” (quote by Jawaharial Nehru), On Aura Tout Vu’s couture show is indeed the window to a whole new world of adventures and climaxes.

And to get into the exciting world of On Aura Tout Vu, we spoke to the ever-energetic duo Livia and Yassen who shared with us everything and anything that excites them, and also what it is like for them while they are churning out stories and concepts of clothes.

Plus, they also shared with us their experience whilst dressing Lady Gaga and which celebrity they would like to dress next (a very unexpected choice) !

Hi Yassen and Livia, it is really nice seeing you after the Haute Couture press conference last month. At that event, you’ve showcased a glamorous collection alongside realistic centaurs from the Greek mythology. Can you tell us about what you will be presenting?

LIVIA: “For our couture show, we would be presenting two collections and we would like to have a big show since we are the finale show of the fashion week.

In Highlight Fire, the world is visualized to be burning and everything is being destroyed and there is crisis everywhere, so in the collection, we are actually focusing on the rebuild where everything is new again.

On the other hand, ‘Somewhere Else Kingdom”s ideology is based on the fact that in this new world, every woman can be a queen, so what you would see would be several queens of the world .”

We know that for fashion and couture houses, each designer and couturier has his/her own style and different approach when conceptualizing a collection. For you, how do you guys go about with the design process of each collection?

YASSEN: “I think for us, the most important is the idea which we want to transmit. We would start with words, inspirations and what we feel about the world around us, basically everything that can inspire us. Then, we would work a lot and come up with the idea of the show.

From there, we would start drawing our designs and choose our materials. Technically, it is a very long process but the most important part of it all is to decide on what we want to say and to use our collection to translate our ideals and message in our works.

For us, that’s especially crucial because we feel that there are many people who are just designing beautiful dresses, but for us, our designs are crafted to tell a story, to provoke the senses and to spread a message.”

LIVIA: “Also when our clients buy our pieces, they are in fact buying our concept, our spirit of the collection and also the vision of our fashion rather than merely for the cut. When worn, the wearer also don on our personality.”

Describe a typical day in your studio.

LIVIA: “For us, the first thing we need to have is our coffee. Then, we would proceed to have a meeting with all our staffs and assistants, to tell them what they should do for the day. After which, it would be going through all our emails and basically replying to all of them.

So for us, our mornings usually go on really quickly, like a snap of the finger. This is especially so since we have a large number of clients and suppliers in Asia, and because there’s a time difference of approximately seven hours between us in France and Asia, so we have to get everything settled before noon because it would be evening in Asia then. So yes, mornings for us are insane.” 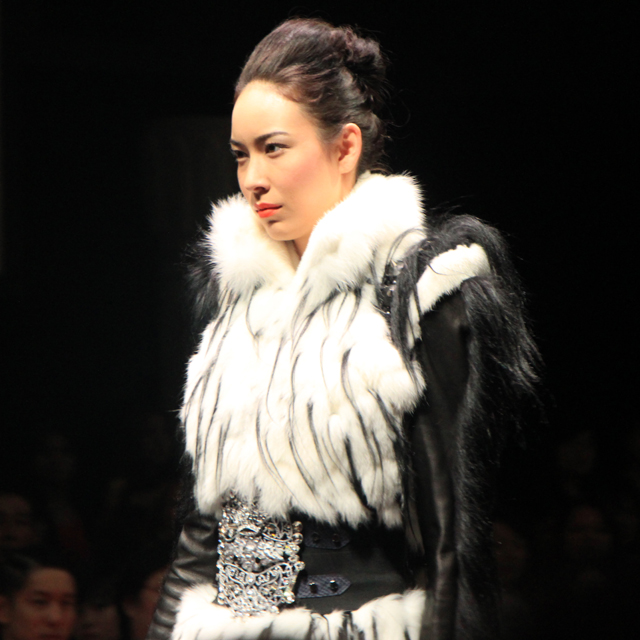 We’ve realized that you have presented quite a few shows this year which include Dubai and many others, so how do you feel about your upcoming show in Couture Week Singapore 2012, and what can we look forward to?

LIVIA: “Yes, we were in Dubai before coming over to Singapore, and recently, we were also at Geneva recently. This year alone, we have presented at Mexico, Georgia, Polland, Vietname and a couple of other countries. For us, we would normally present our collection to at least a minimum of three countries each year and we travel alot.

As for our upcoming show, we are really excited as Singapore is a very new city to us; the people especially are really fashionable so it’s not easy to impress them. So we must surprise them.

On top of the show, we are also organising the after-party and it is there that we will input in all our surprises. Like our name goes, ‘On Aura Tout Vu’ which mean ‘you think you’ve seen it all’, there will always be surprises from us!” 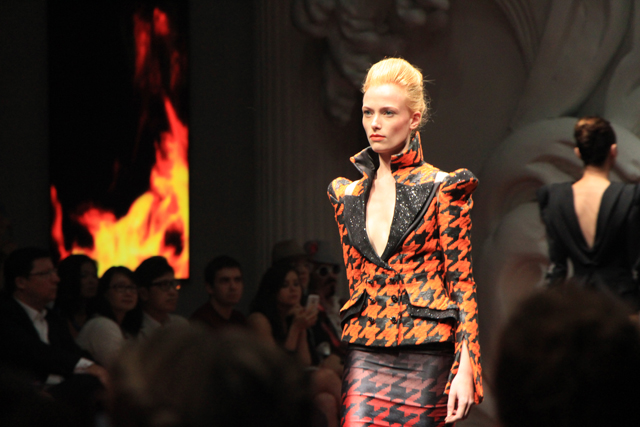 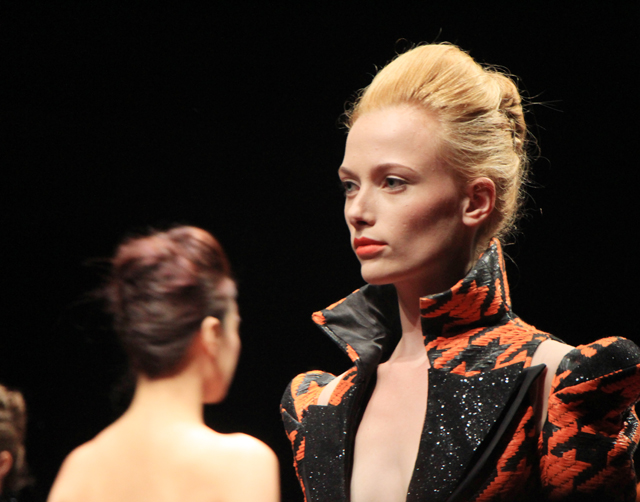 What was the longest time you’ve spent on creating a couture gown? And which is it?

LIVIA: “One month and a half or maybe even more! Some of our more intricate dresses especially are worked in processes, just for the embroidery of a dress can take up to a month or two for two persons to complete it. Embroidery itself is a technique that is very, very time consuming.” 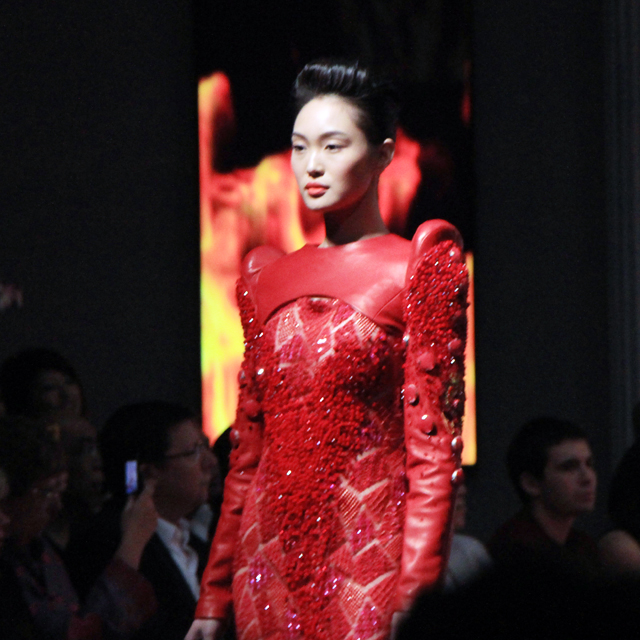 Name a couturier whom you admire

LIVIA: “Of course! Every single couturier in this event! They are people with very strong direction and personality and that’s what we like about them, even if their style may be very different from ours.

We also like Alexander McQueen and Christian Lacroix alot because their styles are very strong and we do not like designers who do not have strong concepts.” 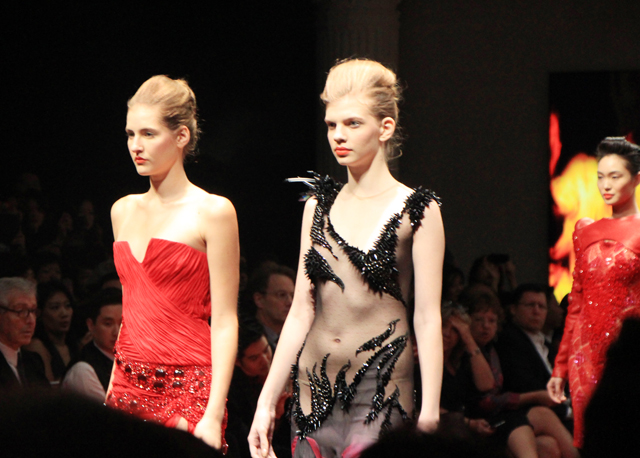 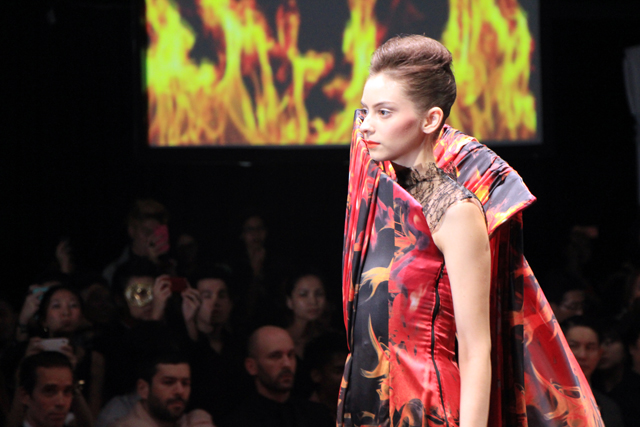 What does couture means to each of you?

LIVIA: “To me, couture means excellence”

Both of you have been joining forces in On Aura Tout Vu for more than 10 years. What do you enjoy from working with each other?

YASSEN: “We enjoy the results of our work” 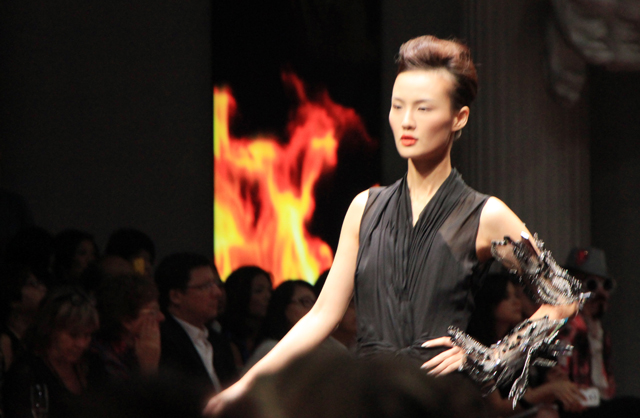 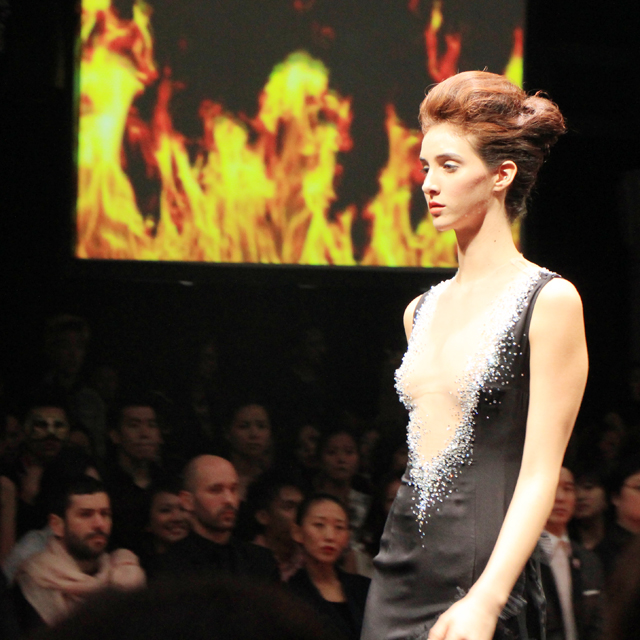 Let us talk about celebrities: Just recently, Lady Gaga has worn an On Aura Tout Vu gown to rave reviews. Tell us more about it.

LIVIA: “Lady Gaga actually bought several pieces from us, some day couture pieces from us and also some exquisite gowns for her special events. It means alot to us since we existed way earlier than Lady Gaga. It thrills us that our gown inspires her and her personality.”

Apart from Lady Gaga, name another celebrity client of yours who has left a huge lasting impression?

YASSEN: “Yes, there is a singer in Hong Kong, her name is Ivana Wong. She is the number one Chinese singer and during her city concert tours, she wore our gowns and it was a really nice experience for us.” 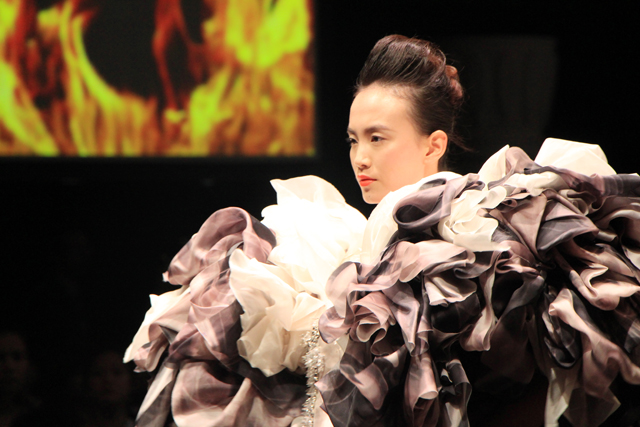 So which other celebrity do you hope to see them in your clothes?

YASSEN: “Maybe the Korean singer PSY who sang Gandam Style, why not? I think we can design for him a funny suit! (*laughs) “ 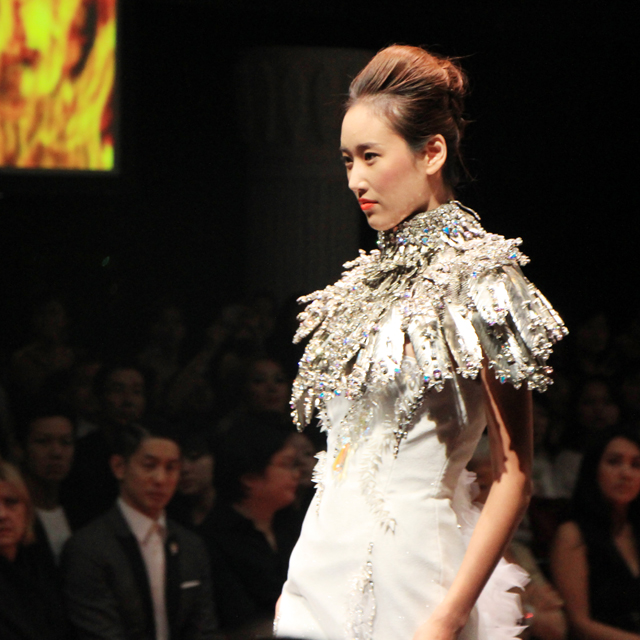 You guys used alot of materials in all your gown, from feathers to intricate beadings to diamantes and even plastics and some crazily gorgeous galaxy prints from your previous collections, which is your favourite material to work with?

If you could sum up the elements of your creations with one word, what would that be?

LIVIA: We would sum it up with the French word ‘Ludique’

YASSEN: It means surprising in a glam way. Or maybe the word ‘Playful’ can be used to describe our creations too!

And here are some shots from backstage right after the show. Kudos to the wonderful models and of course, Yassen and Livia for the awesome poses and interview!

Channeling the sexy lace details at the back of the dress

Model Sara Chan in a white angelic gown, one of the most beautiful gowns from the ‘Somewhere Else Kingdom’

It’s a wrap! The group photo at the backstage after the wonderful runway show

And last but not least, it’s Livia and Yassen from On Aura Tout Vu striking an artistic shot of themselves for us!

A million thanks to Livia and Yassen for the wonderful interview!

Visit http://www.onauratoutvu.com/ to check out their other collections.