More than just a musical: The costumes behind ‘A Singaporean in Paris’ 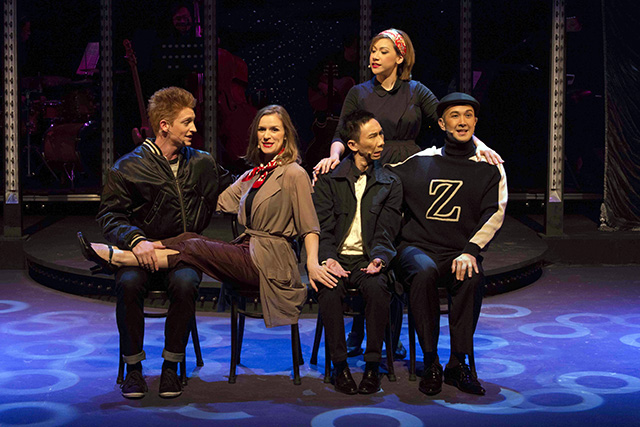 It is true that staged show offer us the pleasures of clothing not simply as a material garments but a mode of dream. It fosters a feeling of expectancy, awakens the imagination, and maintains an incessantly renewed sense of novelty” (Diana Festa-McCormick in 1984 in Fashion in Fiction), and Sing’theatre Production’s latest offering, ‘A Singaporean in Paris’ does just that!

Directed by Hossan Leong, the musical which is a revamp of it’s successful staging in 2010, is a comedic yet life-like take that chronicles around the experience of KQ (Hossan Leong), a Singaporean artist as he travels to Paris to pursue his life-long dream of performing in a cabaret. Here, he explores new adventures and gains friendships in the company of other foreign talents who are also pursuing their own dreams; Terrence (Linden Furnell), Sofia (Mina Kaye), Edmund (Peter Ong) and Anne (Vicky Williamson). The musical runs from 11 to 23 March 2014 at SOTA Drama Theatre.

Beneath the thick French accent, the subtle humour that lives in the air and in-between conversations, the string of heartwarming and entertaining French and English songs alike, as well as an eclectic hint of Singapore culture (think Singapore slangs and incorporation of favourite Singapore food like durians), lies the biggest highlight for me while watching the musical, which is the wardrobe itself.

Vicky Williamson and Linden Furnell as Anne and Terrence in ‘A Singaporean in Paris’. Image: Sing’theatre

Put together according to the creative vision of fashion director Daniel Boey, the casts were adorned with a masterful slew of apparel pieces, which were picked from the collections of Singapore and Asian fashion designers for that local flavour. They include N. Tyler, Reckless Ericka, Odds, Still, Cruise, Revasseur, Thomas Wee, Frederick Lee, Joey Samson as well as JBB. They are contrasted with archival vintage pieces from Daniel’s own wardrobe, with the likes of Junior Gaultier Vintage, Versus, 90s mens suits from Burro, Yohji Yamamoto, Dolce & Gabbana as well as Ermenegildo Zegna’s iconic ‘Z’ sweater, pairing these pieces with contemporary threads from international labels such as Calvin Klein and Agnés B.

They were all discerningly picked and styled to emulate after the flair of the Parisian style, based on Daniel’s experience from living in the city of love.

Hossan Leong as KQ and the cast of ‘A Singaporean in Paris’. Image: Sing’theatre

Through varied looks in the texture and density of the fabrics, the motives of each character were further deepened.

The linkage between one character to another were similar in aesthetics, through a seemingly preeminent dandy style, which were consistent throughout the wardrobes for the male actors in the musical, whilst their female counterparts were donned in loosely, fitted dresses, cinched by brightly-coloured scarves in sophisticated manner.

Linden Furnell and Mina Kaye as Terrence and Sofia in ‘A Singaporean in Paris’. Image: Sing’theatre 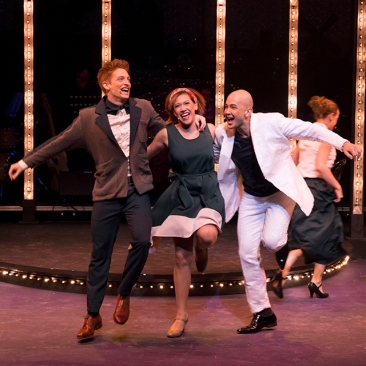 All of them were specially customised and tailored for the actors to ensure perfect fit while allowing room for dances and the interactions between one character to another in from scenes with heartbreaks to mishaps of lost baggage as well as scenes where a new hope in life is found.

While I was in fact looking forward to witness the heavily-embellished mirrored jacket from Filipino designer Jail Jeans, which was hinted in Daniel’s earlier post on his instagram page (@danielboey), in action, I was disappointed to know that it was dropped from the set. Reason being that it was too uncomfortable for the actor to move in it. A few other pieces including one from designer Afton Chan’s old collection were dropped as well.

“If they had told me during rehearsal that the costumes didn’t work, I could have made new pieces overnight, but not three hours before the opening night,” declares a less-than-happy Daniel. “My magic wand can’t work that fast.”

That being said, ‘A Singaporean in Paris’ is a musical that scored the ticks in the visual department, from wardrobe to the cabaret set design. It’s light-hearted approach in terms of storyline makes for an entertaining night out at the theatre, for all ages alike, giving insights to anyone who wishes to know what it’s like to be a Singaporean in Paris.

Tickets start at $40 from SISTIC.