And this season’s Swarovski campaign is clearly one of the most impactful campaign I’ve seen so far from the brand.

Featuring South African supermodel Candice Swanepoel and shot by acclaimed British photographer Nick Knight whom we all know to have shot Lady Gaga, Kylie Minogue and David Bowie amongst many other influential figures in his editorial works, his approach which has always been attuned to an experimental direction is very much evidential in this three-photo campaign series.

Showcasing a beautiful and strong action woman adorned with crystal-encrusted gears from SWAROVSKI ELEMENTS against a blooming bouquet of freshly-dewed garden roses, the photos paint a sweet yet expressive and luxurious scene that transcend certain fantasy elements in a sleek, confident notion.

It’s key highlights in those scenes are shone on the array of wondrous and dazzling motorcycle helmet, dumb bells and skiing goggles which add in to the whimsical attributes of the shoot.

Adding these onto the equilibrium, the shots are transfixed on a story of how the SWAROVSKI ELEMENTS crystals will shine against two types of beauties; one that is created by man (the woman) and another by nature (roses), demonstrating the branding of Swarovski’s crystals- that is how they are not only innovative but also, versatile. Most importantly, it also echos the motto of the brand: “all things extraordinary”. 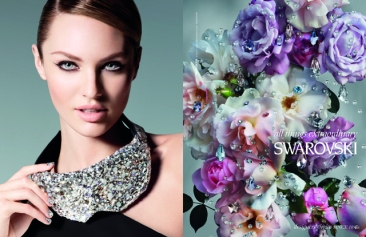 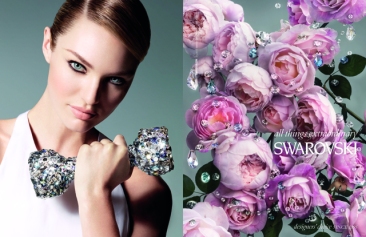 “We wanted the campaign to capture the essence of the cool contemporary woman. Beautiful, healthy and strong, she is in charge, and can compete in any way. She is also fun and kind of humorous. Nick catches her spirit perfectly. But more importantly, this is an overarching corporate campaign celebrating the modern woman and Swarovski crystal as a design ingredient supporting creative expression.”

– Nadja Swarovski, Member of the Executive Board, Swarovski Crystal Business

For one, this timely campaign also goes in line with Swarovski’s recent involvements and collaborations in the creative scenes, in the jewellery scene and also in architecture, design, art, stage, lighting and even fashion, where they have partnered with many top names including Rodarte, Prabal Gurung, Mary Katrantzou and Marios Schwab in a Swarovski Collective series.

With that, we are incredibly excited and piqued when this campaign hits the brand’s worldwide March lookbook, and also for what’s to come in the Swarovski Collective series, which has shown at New York Fashion Week and  will be showing in London, Milan and Paris Fashion Week in the upcoming weeks.

Till then, here are some of the behind-the-scene photos of the campaign. 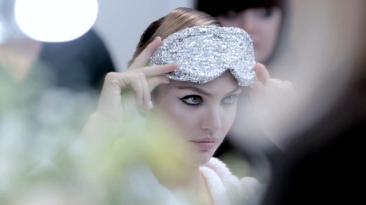 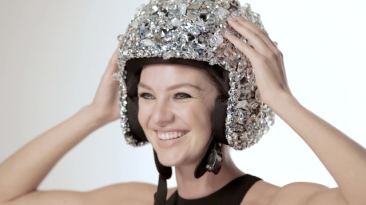 Candice Swanepoel with a crystal helmet

Candice Swanepoel with the finished shot

Discover more about SWAROVSKI ELEMENTS at swarovski-elements.com and shop the collection via a Swarovski store near you.