ONES TO WATCH: 10 Questions with Spanish Fashion Designer Enric Marti

Why are we so desperate to turn men into gods? Our interview with young fashion designer ENRIC MARTI, the man behind ‘The Worship’ collection, reveals insights towards society’s obsession with celebrity culture and Friedrich Nietzsche’s death-of-God decree.

The 23-year-old is definitely not your ordinary fashion designer.

Despite being new to the scene with only two accolades under his belt – namely the title of ‘Best Emerging Designer’ at MODAFAD 2015, a fashion awards show dedicated to emerging fashion designers, as well as a recent showcase of his collection at Barcelona Fashion Week 2016 – Enric Marti‘s voice and identity is strong.

With his debut collection ‘The Worship‘ alone, he has already asserted that the world is currently being afflicted with the ‘celebrity worship syndrome’. It is an obsessive condition propelled by the proliferation of things such as Youtube, Instagram and gossip rags.

His affinity towards advocating and creating emotions through the language of fashion builds on the argument that no matter where you go, these celebrities are unavoidable – omnipresent to some extent.

And indeed, it is simply irrefutable that the faces of the hottest pop singers are being plastered on billboards in the sunways and on the highways, convincing you to sign up for a membership at that hip gym that has just opened in town.

Needless to say, if you open the pages of a random magazine, the probability of them smiling at you with their million dollar smile in an ad for some overpriced household product, or hogging a high end, luxurious bag that costs $10,000, is equally high.

Plus we all know that a snippet of our favourite reality show host flaunting her new outfit for Christmas or cradling her young one at home is bound to send her Instagram and Facebook Page likes on a rocket ride to the farthest planet you can think of – “astronomical”, as some would say.

You get our point, don’t you?

So to cut the chase, we speak to Enric Marti to get his thoughts – in totality – on the ‘celebrity worship syndrome’, as well as a low-down on the deets of his latest collection and designs:

JY: Having launched your fashion label, what is your favourite part about being a fashion designer in Barcelona?

EM: Being a fashion designer in Barcelona gives me the ability to recreate a certain atmosphere through colors, fabrics, shapes and all kind of decorations in clothes.

Moreover, when you believe that fashion is the opened door to the world of fantasy, there is a fine line between costume and the real fashion industry, and playing around with those two environments feels the most exciting to me. 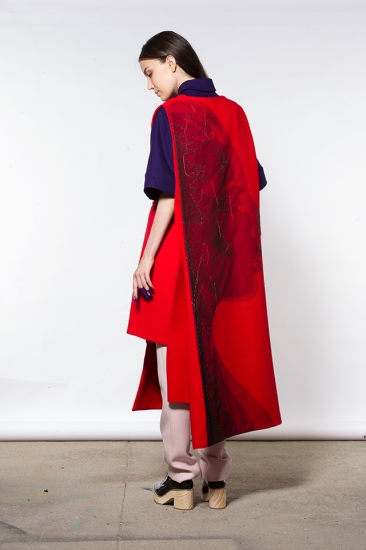 JY: How did you select the materials you used for this collection?

EM: I usually work with heavy thick fabrics which help me translate the volumes I’ve pictured in my mind to reality. Wool fabric structures is a common sight in my collections. I also adore bright colours so velvet is my go-to fabric choice for doses of such vivid hues.

JY: It is said that colours have the ability to set a tone for a design or collection. What kind of mood were you going for with your vibrant colour palette for the ‘The Worship’ collection?

EM: I want to present a religiously/spiritually color mood mixed with the brightness and accent saturations of the art and entertainment worlds – where those celebrities that we (humans) worship – belong to. Ever since I’ve read David Freedberg’s “The Power of Images”, I am also super interested in pursuing the interesting concept of design through the ‘presence’, although it is complicated and hard to achieve.

JY: We noticed some fascinating sewing techniques being used on the pieces of your collection as well. Tell us more about it.

EM: Since “The Worship” is all about conveying the message on the weakening state of tradition and how it has since been restructured into the face of the contemporary, I decided to use a range of old sartorial and couture techniques; such as basting, embroidering, etc, and applying them onto modern structures and silhouettes. I guess this is my approach of turning something conventional into something cool and modern, and also an unconventional way of seeing heritage in fashion. Besides, I’ve always been obsessed with embroidered-textured pieces, so why not? 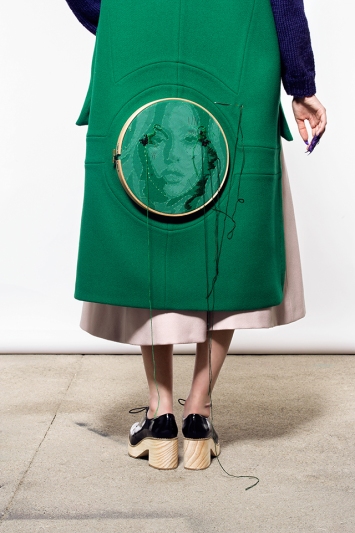 JY: On average, how long did you take to finish a detailed hand embroidery piece like this one? (above)

EM: It depends on how ambitious the piece is. It may take three days, a whole week, or even longer. The time taken in production does not bother me because I’ve always rejected creating easy, wearable and commercial clothing without a certain value behind it. I am confident that my clients care and appreciate the artisanal charge my collection encloses.

JY: You mentioned that your collection was conceived based on Friedrich Nietzsche’s death-of-God decree; one that declares that God is no longer a credible source of absolute moral principles, and that  celebrities are the new ‘Gods’. In your opinion, what makes you think that celebrities are better originators in this area, and how do you think your designs have successfully translated that message?

EM: The turn to individuality along with the weakening of traditional faith has bled into every specialized sector of modern culture. In such situations, the worship of celebrities represents a familiar concept that audiences can adopt into the formation of theirsocial identities, and this constitutes a change in the way cultural meanings are generated as the celebrity becomes a key site of attention and personal aspiration.
The very idea of a ‘celebrity’ generates para-social interactions, which are instances whereby worshippers respond to what they think of as real emotional attachments with figures that they only knew through their representations in the media; a one-way relationship. So the investment with phantasmal projections of need -> fulfillments becomes real, as much as it could’ve been God for Christians back in the days.
Having said that, “The Worship” is therefore my aim to translate this halfway reality/fantasy way of living the spiritual contemporary life, with the use of intricate embroideries and colours combinations.

JY: Would you consider yourself an advocate or change agent of celebrity worship?

EM: I would prefer to take a neutral stance. I believe this whole concept happens for a reason and I am just trying to focus on making the “evidence more evident” as well as on my artistic expression, which is clothes.

JY: Who are some of your ‘celebrity’ Gods?

EM: Emotionally, it would be Lady Gaga. But it could be whoever that I feel is most relatable depending on the para-social interactions. 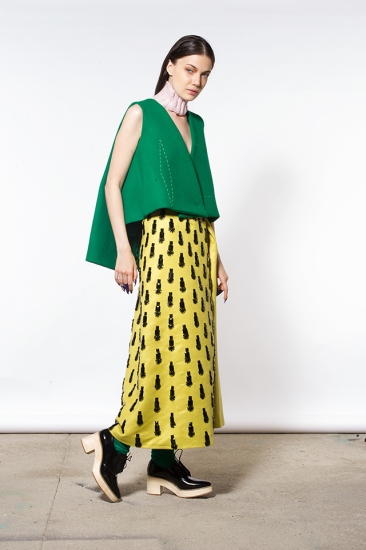 JY: If there could be a song/music to accompany this collection, what would it be?

EM: I was pretty much into Stole The Show by Kygo when I was working on this collection although the song doesn’t summarises my work. It does uplift my mood though. 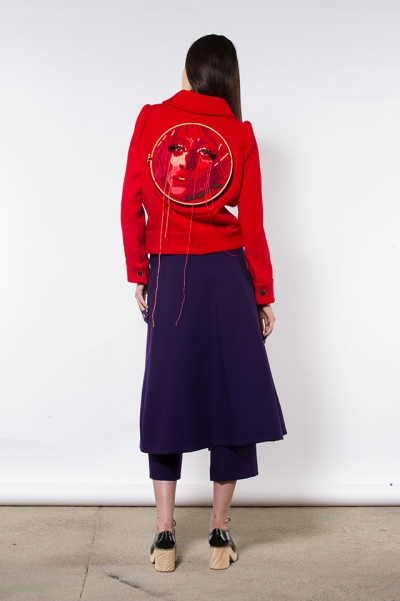 JY: Tell us about the collection you have presented last month at Barcelona Fashion Week.

EM: When presenting the Fall/Winter 2016 collection on the 5th of February, 2016 at Barcelona Fashion Week, I wanted to do a continuation of sorts from my last collection, since it only consisted six looks. I thought it still had more to offer.

I like thinking this new collection is ‘The Worship”s little sister. It is called “Loathed Reality”, and it talks about pursuing a glimmer of hope in our innate sadness by understanding our life as a painted canvas. I believe that it’s possible to change our historical outline and fix our traumas just by metaphorically painting on top of the ugly aspects of life. I used a lot of colourful velvet, wools and chiffons, transparent and metallic embellishments as well as tulle-technique face images. Needles as decorations were also incorporated along with a range of other approaches. Having developed and designed this collection, I definitely feel that my identity as a designer has grown and became more defined.

This article is published as part of Couture Troopers’s Issue 1: BELIEF

#SPOTLIGHT: Indonesian fashion photographer Ryan Tandya creates some of the most captivating visuals based on his unconventional notion of avant garde beauty and his fascination with the intangible.
“It’s about gritting your teeth and pushing through life with a smile on your face, even though all you want to do is curl up in fetal position, cry and quit.” ❤️❤️❤️ The new, hard-hitting music video from #BrookeCandy entitled ‘Happy’, directed by #Rankin.
[SPOTLIGHT] It’s Back to the Future with House of SheldonHall’s 19th Century-inspired AWSS 2019 pieces, from dramatic ruffles to intricate embellishments. What a visual feast!
Head over heels in love with the HOWL Collective’s newest project, ‘Guo Pei - Couture Beyond’ - a fantasy-like photo story that captures the breathtakingly-gorgeous and showstopping creations from the couturier.
#Quoteoftheday: For every minute you are angry you lose sixty seconds of happiness. – Ralph Waldo Emerson
Happy Women’s Day, y’all!! ⚡️⚡️⚡️ What better way to celebrate it than to relish in this divine shot of @ladygaga as a couture goddess in @jeanpaulgoudeofficial’s work in @vmagazine!
Dolce & Gabbana’s holiday offerings from its Cruise 2019 collection are made up of fabulous accessories and arm candies that will get you the oohs and ahhs from friends at Christmas parties! (link in bio)
#Showcase: Surreal grotesque portraiture artist #AnnaTsvell takes fashion illustration to the next level with her slightly dark approach, and by going against contemporary notion of beauty with exaggerated proportions and features.
FOLLOW @COUTURETROOPERSMAG
Loading Comments...
Comment
×
<span>%d</span> bloggers like this: